People move from cities to suburban areas because of plenty of reasons but nowadays especially after COVID 19 outbreak, the rate of exodus from urban from urban accelerated the process. This generation also seems interested in looking for shops, restaurants, and other essential services within reasonable distance. Therefore, businessmen who are establishing businesses in the suburbs areas will soon attract more people.

People Move from Cities to Suburbs 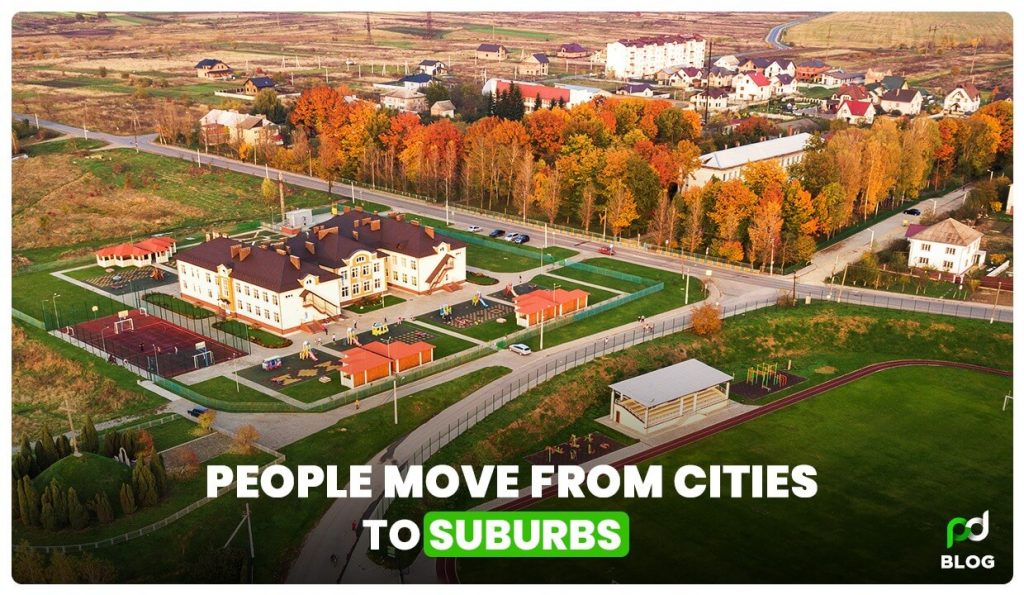 These days Millennials begin to have children and they pursue different lifestyles, many find that urban life is not appealing due to so many reasons, which we will discuss shortly. The practice of people moving from urban to suburban started as cities move suburb in this decade but the rate of exodus from urban began after the Covid 19 outbreak and there is no denying that it has accelerated the process. before the global epidemic forced everyone to move away, but there is no denying that COVID has accelerated the process. These days people prefer to avoid the metropolitan hustle and bustle, a life where they can live peacefully.

At the same time, this generation is more interested in going out looking for shops, restaurants, and other essential services within a reasonable distance. Therefore, business men who are establishing businesses in the suburb areas will soon attract more people, for example, Bahira Town is the perfect example of suburb life, where people live without any security issues. That is why people from abroad usually buy houses in Bahria Town because it’s away from the city and all the fuss it offers.

Most common Factors that drive this practice, There are many factors, but major factors which influence the people to move, First, there is the cost, as we know that life in a city downtown is way more expensive especially if we talk about the big cities of Pakistan like Lahore, Karachi, Islamabad, real estate prices goes up hellishly each day, whereas in the out skirts of city Lahore where colonies like Bahria Town, Bahria Orchard and other colonies have better facilities, lower land rates, more options and security at its best.

Exclusively if we talk about the city life then the new trend of cities move suburban is justifiable as living in city itself is a challenge and especially with this corona outbreak and practicing social distancing is almost impossible in that segregated urban life, forcing residents to spend their time indoors most of the time avoiding any outdoor visits to avoid infection.

COVID-19 has brought many challenges to businesses of all sizes, some companies, such as Microsoft, turn homework into a permanent solution. This reason for this initiative is apparently the unsuitable environment of urban life against pandemic. Real Estate business also faced many turbulences during the time and people does not have buying power anymore to afford houses on their own. Infect if this trend for the people going for suburb side of the province and taking all their businesses over there almost depict cities move urban practice, then consequently there might be a down trend in property prices in urban areas due to higher demands for outskirts of city.

Over the decade the real estate prices gone up as well as recession in our country Pakistan. Many people lost their jobs, tenants now looking for further cheaper, underprivileged areas and landlords are willing to rent out their properties, such financial distress has made people to go for suburb areas of our country. Because the cost of living in city in 3 times more than living in outer side of city, where almost everything is cheaper, housing, gas, utilities, food.

As you get closer to the city, the living space is getting smaller and smaller. However, in the suburb areas, buildings and other structures are more widespread, because there is more land.

You will spend the same amount of money as a small area in the city. You pay less per square foot in an suburban house than in an urban one, Apart from just houses, Suburb areas like Bahria Town Lahore has plenty of parking spaces, parks, courtyards and outdoor activities.

People always prefer safety and security of their families. After the pandemic and recession simultaneously, these anomalies brought increase in crime rate in our cities. Driving the shift where people feel more secure in suburbs with lower crime rates than nearby cities.

You will find more Greenland and fresh air in Suburban areas as compared to cities, where pollution has taken away all the nature and the condiments that comes within. You would not see any birds in cities, lesser trees, more infrastructure and traffic.

Cities are already crowded with buildings, cars, and taxis. No matter where you go in the city, you will always find yourself trying to get through a large crowd of people. However, villages and towns are still resourceful and ecofriendly with less population  making the residents to live more peacefully.

In metropolitan cities, houses, apartments and other residential places are so congested that, people barely encounter any privacy and usually get indulged in each other’s privacy matters, whereas in suburban areas, especially these newly developed towns around the Lahore city outskirts are secure and gives 100 percent privacy to individual household as they designed houses in a way that neighbors could barely intervene.