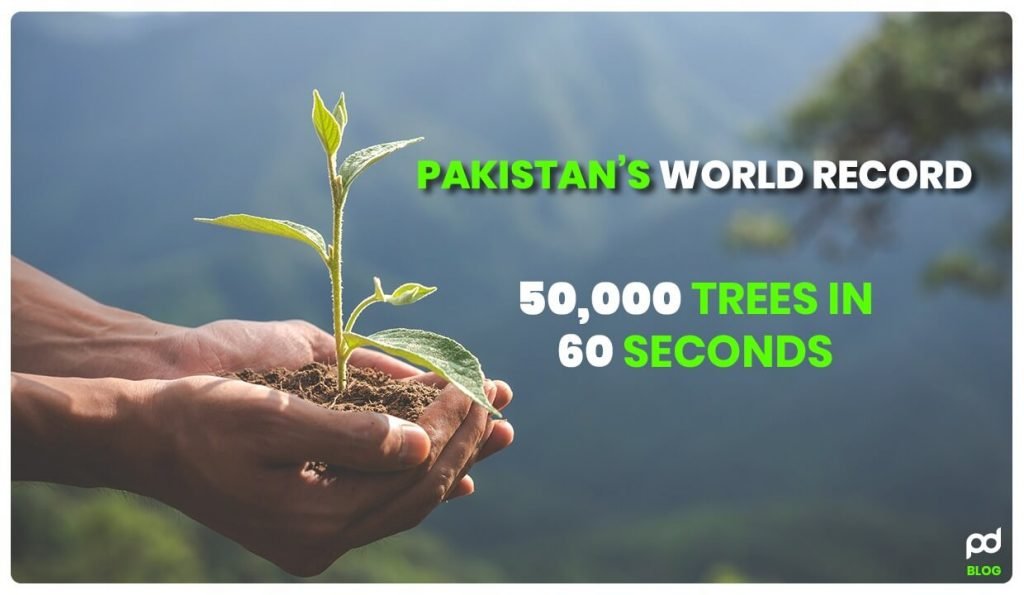 Prime Minister Imran Khan has taken this initiative to plant 10 billion trees in Pakistan and recently has made history by planting more than 50,000 trees in less than a minute.

The city of province Punjab Gujranwala has set this new record and taken over the previously made record by people of Bhutan and claimed the ownership after the students planted more than 50,000 plus seedlings in less than one minute.

Gujranwala name is now in the Guinness Book of World Record on account of  one minute tree plantation challenge. It was the dedicated efforts of those students from Gujranwala and the Minister of Climate Change Malik Amin Aslam, who was leading the plantion campaign.

Gujranwala students performed this spectacular activity on 12th of August 2021, planted exactly 52,040 plants in less than 60 sec and broke the record made by Bhutan in 2015 by planting 49,672 trees in a minute.

Global Warming is increasing each year, seems like humans have been not so gentle with the planet by cutting trees, emission of harmful gases and other wastes. The only solution to slower down the process of global warming and its effect on Ozone layer is to plant trees as much as we can. Humans for centuries build their infrastructure using forest wood, apparently this practice made our planet less green and more arid. The future of our beloved earth would be more terrific if we do not stop.

These seedlings in Gujranwala were planted next to a green belt, almost 14 km away from GT Road that passes the city Gujranwala. The total headcount of student, teachers and other official bodies was 12,500+ and the entire noble practice was recorded by camera mounted drone. Parks and Horticulture Authority (PHA) Gujranwala has assured to take care of these seedlings over time.

The project is organized under the Prime Minister Imran Khan’s vision of planting more than 10 billion trees in Pakistan, has intrigued the youth to take an effective participation for a positive climate change. Not only universities students but also kids from school and collages are also making themselves useful in reaching the target for our future generation survival.

This was absolutely a gift from the people of Gujranwala to Pakistan on its 74th Independence Day, and this message on 14 August, 2021 they delivered to the entire nation is purely of being loyal, sincere and devoted to this beloved country and its future.  On this occasion when every Pakistani is enjoying the independence individually, Minister of climate change appealed to the nation to change this mentality of just being independent apparently but not mentally, He added that we should change our thinking regarding the true meaning of Independence, it’s not about freely using the precious resources that our country naturally has like water, forests, coal mines and other resources, but we need to use them wisely and save for our future generations. Moreover, he said; “Pakistan is at the forefront of tree planting in the world and the people of Gujranwala are leading a nationwide campaign,”

Social Assistant to Prime Minister of Pakistan pointed out that this tree plantation would not only help us in changing climate but also in bringing back the wildlife to the cities, our humming birds and other harmless animals migrated from our cities due to pollution, traffic, deforestation and saturated infrastructure.