CDA and Coca-Cola to Build First ‘Plastic Road’ in Islamabad 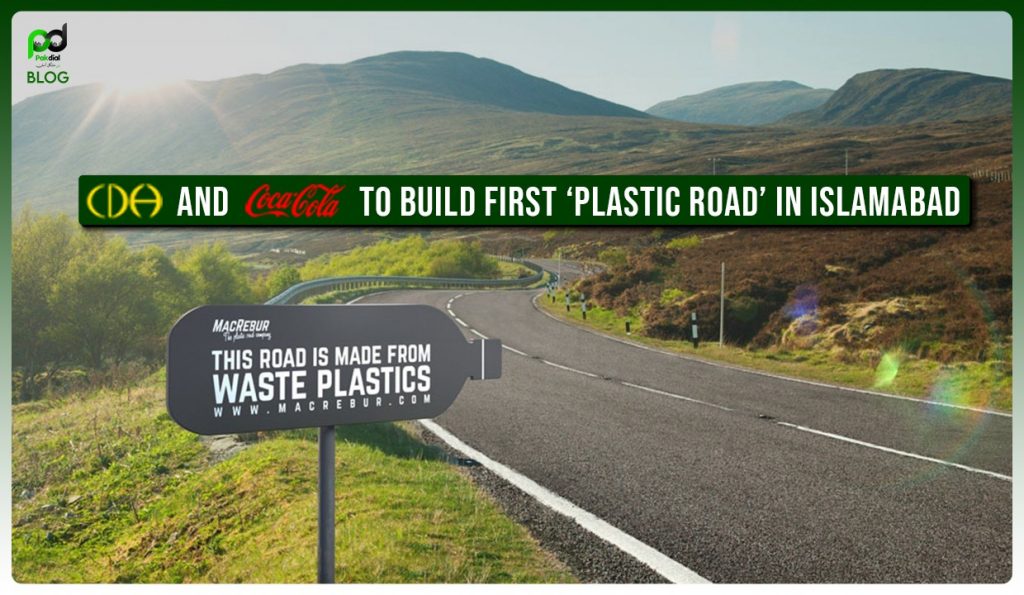 Coca-Cola company is collaborating with local companies and CDAs to construct a 1km recycled plastic road in Islamabad. The idea was to help the globe by reducing plastic waste and raising awareness of ‘Clean and Green Pakistan.’

The Coca-Cola Foundation and its partner WWF performed Pakistan’s first scoping research in ten cities in 2020 to better understand the life of a PET bottle.

According to the report, Pakistan creates over 30 million tons of solid trash each year, with over 10% of that being plastic.

While our country is becoming increasingly concerned about plastic pollution, Pakistan is the second-largest producer of plastic in South Asia, with an annual growth rate of 15%.

Now, as we know that Pakistan has growing concerns over climate change activities. Plastic pollution is a major part of this, with an annual growth rate of 15%, It is a paradox that Pakistan remains the second-largest producer of plastic in South Asia.

While many environmentalists see this as a major worry, recyclers, startup enterprises, and innovation hubs see it as a billion-dollar untapped market akin to those in South Africa, the United States, and Europe.

There is a Global waste management crisis at the moment to address. Coca -Cola is partnering globally towards a solution to reduce Waste World Wide by recycling all plastic bottles and cans by 2030.

Coca-Cola has carefully created a sustainable way to recycle plastic bottle waste after undertaking the insightful Plastic Scoping Study. Coca-Cola Export Corporation Pakistan teamed up with the Capital Development Authority (CDA) and Team-up/National Incubation Center (NIC) to re-carpet a one-kilometer section of road in Pakistan’s capital, Islamabad, with over 10 tons of recovered plastic, including plastic/PET bottles.

The pilot project was launched on Tuesday, September 21, 2021, with an MOU signing ceremony between CDA, Teamup/NIC, and Coca-Cola. The project falls under the World without Waste to achieve the zero packaging footprint of Coca-Cola’s vision.

This is a very innovative concept of re-carpeting roads with recycled plastic waste that has been practiced globally across over 70 countries: however, this is the first time for Pakistan Pakistan has a road mixing recipe that is tailored to the country’s specific environmental circumstances.

Speaking at the ceremony, Fahad Ashraf, VP and General Manager of Coca-Cola Pakistan & Afghanistan said, “This idea provides a breakthrough solution to bring back plastic waste into the productive economy. The plan is to focus on building a community around the idea and the innovation itself. For any concept to be applied and adopted, the people must first believe it, for which the project needs to make a social and commercial sense.”

This project by Coca-Cola Pakistan embarks on the vision of this sustainable innovation with almost 10 tons of recycled plastic being used to re-carpet just a one-kilometer patch of road. These roads are stronger than standard roads 51%. Plus, this process of re-carpeting costs way less than the usual way of construction.

This could result in a surge in demand for recycled plastic, addressing a significant waste management issue that has plagued the plastic packaging industry since its creation.

These outcomes are accomplished by combining recycled plastic with bitumen (a low-grade crude oil made up of complex heavy hydrocarbons) in the right quantities and employing a plastic-asphalt mix to improve road firmness and longevity.

The mixture can be deployed on roadways across Pakistan once it has been proven, assisting Pakistan in meeting its SDG targets. Furthermore, the roads are resistant to wear and tear, which can aid in the country’s infrastructure growth.

Technology, research, and application are all generated by Pakistanis who are highly talented and dedicated to creating a sustainable future.

Under the World Without Waste vision, Coca-Cola Pakistan has spent over 10 million dollars in the last eight years to expand and develop its sustainability portfolio, with a focus on relief efforts, water stewardship, environmental development, education, women empowerment, and recycling packaging waste.

Chairman CDA Aer Ali Ahmed said, “We believe in a clean and green Pakistan, but we also believe in working with each other to create results expansively”.