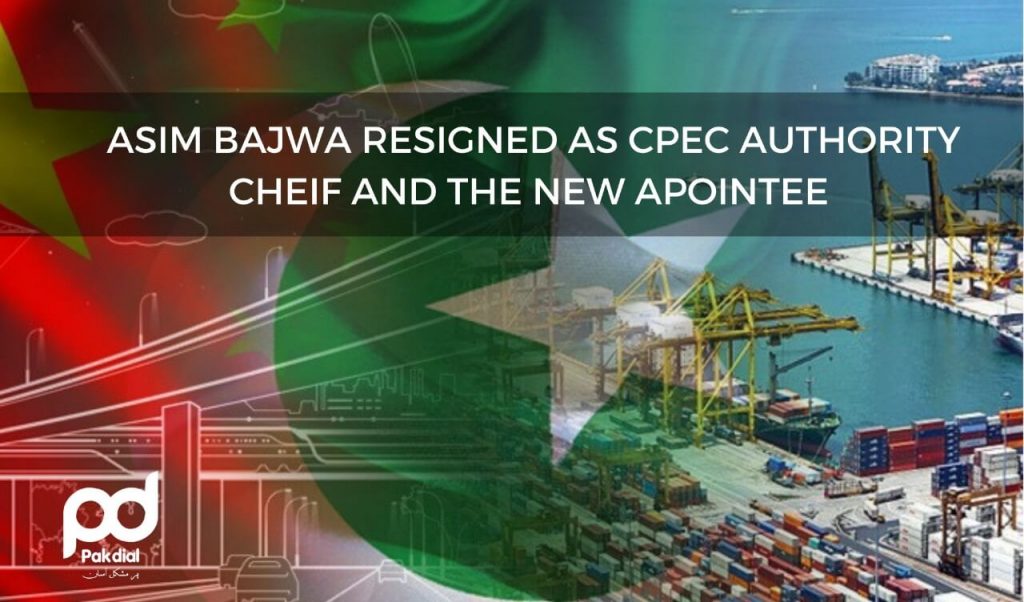 Lieutenant General (retired) Asim Saleem Bajwa on this Tuesday 3rd August 4, 2021, resigned as head of the China-Pakistan Economic Corridor (CPEC), he was thankful to the Imran Government and the Prime Minister himself for his guidance, support and trust in him with this role.

“I bow my head before Allah Almighty for giving me the opportunity to grow and direct the important center of the CPEC Authority as one window for all CPEC programs, and to set the direction for the future,” he tweeted.

He said Mr. Khalid Mansoor is all set to take over this massive responsibility. “CPEC is a way of life in Pakistan; it will transform us into a fully developed world. ”

Minister of Finance Planning, Development, and Special Initiative Asad Umar also was grateful to Mr. Bajwa for his delivered excellence which previously helped in uplifting the CPEC project and also took it far beyond the horizon, indeed expanded its scope for greater opportunities.

The minister welcomed Manyoor to the party as SAPM for CPEC affairs. “His extensive business experience, extensive work with Chinese companies, and his direct involvement in leading other major CPEC projects made him the right person to lead the next CPEC phase.”

An official notice issued by Imran Khan officials on Tuesday 3rd August, where the announcement came with a brief of new Prime Minister Special Assistant on CPEC matters, the candidate who was been called out was Mr. Khalid Mansoor, who was former CEO at HUB power company and current CEO at Engro Chemicals is now appointed as SAPM on CPEC on immediate notice. Pakistan Finance Minister Asad Umar tweeted with profoundly grateful words and said: “Mr. Khalid Mansoor’s extensive business experience, extensive work with Chinese companies, and his direct involvement in leading other major CPEC projects made him the right person to lead the next phase of the CPEC,” he added.

He also thanked Mr. Bajwa for his work as chair of the CPEC Authority, there is no doubt that MR. Bajwa has played a very responsible and dedicated role in this CPEC, strived to reach the zenith of this project and elevated the Pakistan economy. Mr. Bajwa previously served as Special Assistant to P.M. in Information and Broadcasting, from April to October 2020. Before retiring from the military, he served as Commander Southern Command, and was director-general of Inter-Services Public Relations from 2012 to 2016.

We as a Nation wishes Mr. Khalid Mansoor a warm welcome to this new incumbency, where Pakistan is facing economic turbulence on and off, the new selection of SAPM is apparently the most adequate and suitable, because of their past experiences and endeavors, May we see the dawn of new and immaculate Pakistan.